Lidt mere detaljer om hvad der sker på i SEB og GRS, fra Raport Nr. 5: Continuing disruption of the GRS
ncoming ring-shaped vortices on the SEBs jet are causing red ‘blades’ or 'flakes' to detach from the f. end of the GRS, and now also from its p. end. Recently a strikingly dark grey collar also formed around the GRS, and extended p. it as a dark South Tropical Band (STropB). Since Report no.4, the latest activity has been as follows.

On May 13, a large SEBs ring entered the Red Spot Hollow (RSH) on May 13. As it orbited round the RSH, a flake began to separate from the GRS N edge on May 15, and on May 17 this emerged at the f. end as a large red methane-bright ‘blade’, as predicted. It became very conspicuous on May 19-20 as its f. (west) part retrograded on the SEBs away from the GRS, while its leading end remained attached to the GRS and continued to orbit around it. The leading end probably squeezed around the S edge of the GRS on May 20, and I believe it then became the large red blade that emerged from the p. end of the GRS on May 21-23 (as the previous one had done on May 6-7; see Report no.4). The appearance on May 22 & 23 has been extraordinary! Also, traces of disturbance may now be circulating completely around the perimeter of the GRS, so the erosion or splitting on its N side, which observers pointed out on May 22, could be due to one of the earlier disruptions. An extra complication is the STB Spectre, whose p. end is passing the GRS although not clearly visible.

The activity could extend beyond the vicinity of the GRS. Andy Casely points out that as the big SEBs ring approached the GRS on May 10-11, it interacted with the material returning on the dark STropB, spinning up and enlarging. He suggests there might even be a feedback, with the ripples running south of the GRS triggered by the flakes, then occasionally being big enough to interact with retrograding SEBs rings. Indeed, although the SEBs rings do not appear to survive passage around the RSH, plenty of turbulence streams around the S side of the GRS on that dark stream and into the STropB -- very reminiscent of last year's S. Tropical Disturbance passing the GRS. It is conceivable that these interactions p. the GRS could generate a new S. Tropical Disturbance there soon, as happened in the Voyager 2 approach sequence.

On the other hand, since mid-May, the SEBs p. the GRS seems to have quietened down a lot. There is one more retrograding ring there (about 30 deg p. the p. end of the GRS on May 22), but that’s all. On the actual SEBs edge, there is now a beautiful long train of waves, such as we reported a few years ago. So it is possible that the activity will die down for a while – but there are plenty more SEBs rings further upstream.

Although this activity is certainly new and increasing as compared with the last 5 years or so, perhaps we should be cautious about its long-term significance. Much of it would have been below the resolution of most historical observations. As Andy C. says, these disruptions could be quite superficial, only drawing material out from the red upper cloud deck of the GRS while not affecting its underyling circulation.

Nevertheless, the obvious and exciting possibility is that this is the beginning of the end of the GRS. Following its long-term shrinkage, for the last five years it has been only ~14 deg. long, so we are all wondering whether it is now so small that incoming vortices are able to tear it apart. It would be wonderfully exciting if we were able to witness the disintegration of the GRS! However, I suppose this is more likely to be a rather superficial phenomenon, and that the GRS itself will survive for decades longer. 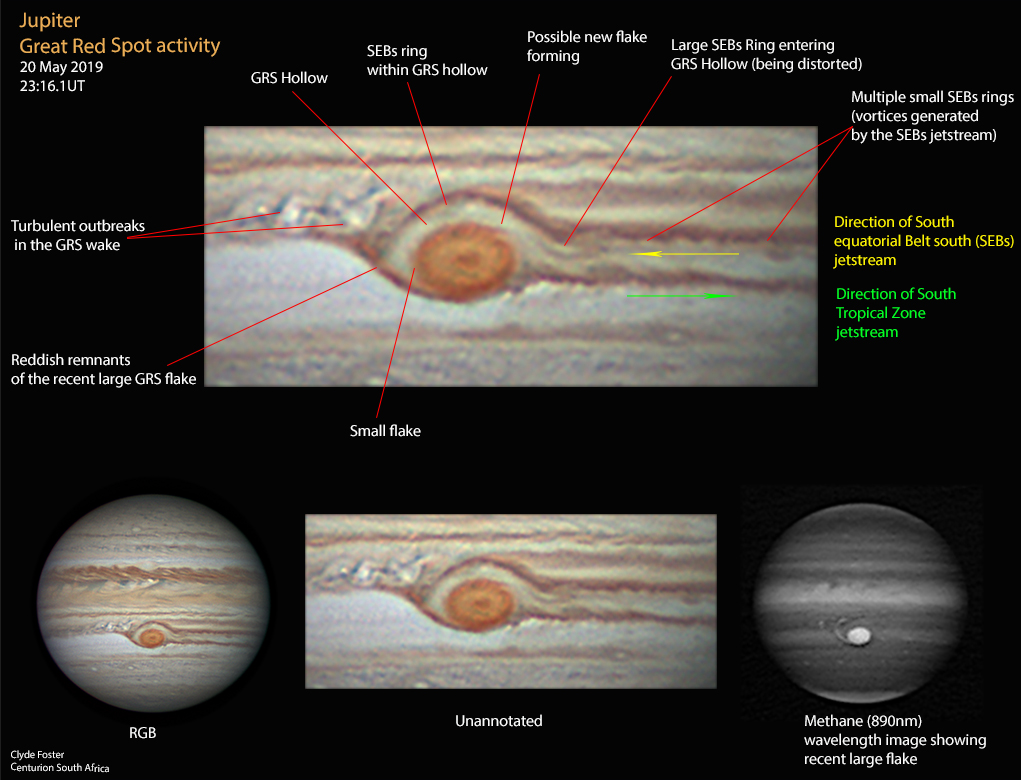 This is one of the two primary belts on Jupiter, and is also probably the most active belt on the entire Planet. It is also seen of periodic disturbances, including the spectacular SEB revival.

Fra Wiki:
The South Tropical Region includes the South Equatorial Belt (SEB) and the South Tropical Zone. It is by far the most active region the planet, as it is home to its strongest retrograde jet stream. The SEB is usually the broadest, darkest belt on Jupiter; it is sometimes split by a zone (the SEBZ), and can fade entirely every 3 to 15 years before reappearing in what is known as an SEB Revival cycle. A period of weeks or months following the belt's disappearance, a white spot forms and erupts dark brownish material which is stretched into a new belt by Jupiter's winds. The belt most recently disappeared in May 2010.[42] Another characteristic of the SEB is a long train of cyclonic disturbances following the Great Red Spot. Like the NTropZ, the STropZ is one of the most prominent zones on the planet; not only does it contain the GRS, but it is occasionally rent by a South Tropical Disturbance (STropD), a division of the zone that can be very long-lived; the most famous one lasted from 1901 to 1939.[43]